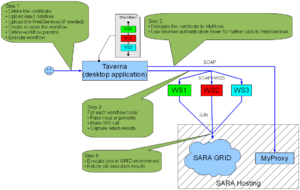 TavernaGrid is a project by SARA and Eagle Genomics Ltd., funded by NBIC. The primary goal of the project is to allow users to compose Grid web services with Taverna.

We just had the project kick-off meeting! Richard Holland was at SARA for three days. During many short sessions, we've managed to get a firm understanding of what needs to be done, and we agreed on the first timebox, which will run until Christmas. Some documents were drafted, which can be found in this Wiki.

Before end of sub-contract:

Jobs can now be submitted and executed and output (or errors) retrieved. No-input, single-output jobs are possible. The client and server side of the service both work. All this is correctly achieved via delegated certificates from MyProxy locally modified within the service to have the VOMS attributes added. Certificates need to be manually delegated to MyProxy before calling the service.

As a result of visiting the team in Manchester, I've produced a plan for the Taverna integration which Alex and Stuart have both reviewed and agreed is sensible. The plan has been placed here. I believe this is detailed enough to serve as a template for the next unit of work to be planned, but please let me know if you need more detail. In terms of timescale for this I can start some simpler parts of it in January, but Tom will be presenting a code tutorial in Manchester in February which I plan to attend, at which point I hope to learn enough to get the more complicated parts of the Taverna plugin code written.

Tasks remaining to complete before end of sub-contract, in order of priority:

Code-in-progress has been committed to SVN. API documentation amended and updated.

Remaining to do in this sub-contract:

Remaining to do in this sub-contract: